Supervised by Philippe Blanchard
1. A concise description of your Independent Study (minimum 250 words).
This independent study, stretched out over the course of 4 months in the spring
semester, will be an investigation into the ways in which one can use natural materials
to create animated documentary content that reflects on issues of sustainability. It is
my intention to spend the course of my research project growing, cultivating and
harvesting an organic garden of herbs, flowers, roots and vegetables traditionally used
in the creation of natural dyes and inks.
In addition to cultivating these plants and investigating the history of their traditional
usage, I will also be producing my own dyes for the creation of textiles for stop-motion
puppets, and my own natural inks to be used as hand drawn animation medium.
I will document the process of their growth through time-lapse photography and film, as
well as by keeping a daily journal outlining the progress of the garden as it develops
and my discoveries along the way – both through practical and academic research.
Providing I receive approval from the ethics board, I also plan on conducting interviews
with local farmers and those who have greater experience than I in botany with regards
to more traditional methods of growing – which may not be outlined in academic texts
on the anthropology of traditional agriculture.
Finally, I will begin animated experiments into how these natural materials can be used
as source media and mediums in my artistic practice of animation. These experiments
will be inclusive of techniques spanning from the under-camera animation of raw
materials, to the construction of puppets, and drawing in more traditional animation
styles.
What will emerge will be a materials study in the ways in which I can continue to
develop my thesis work in physical materials that reflect the thematic content of the
animated artwork I create. 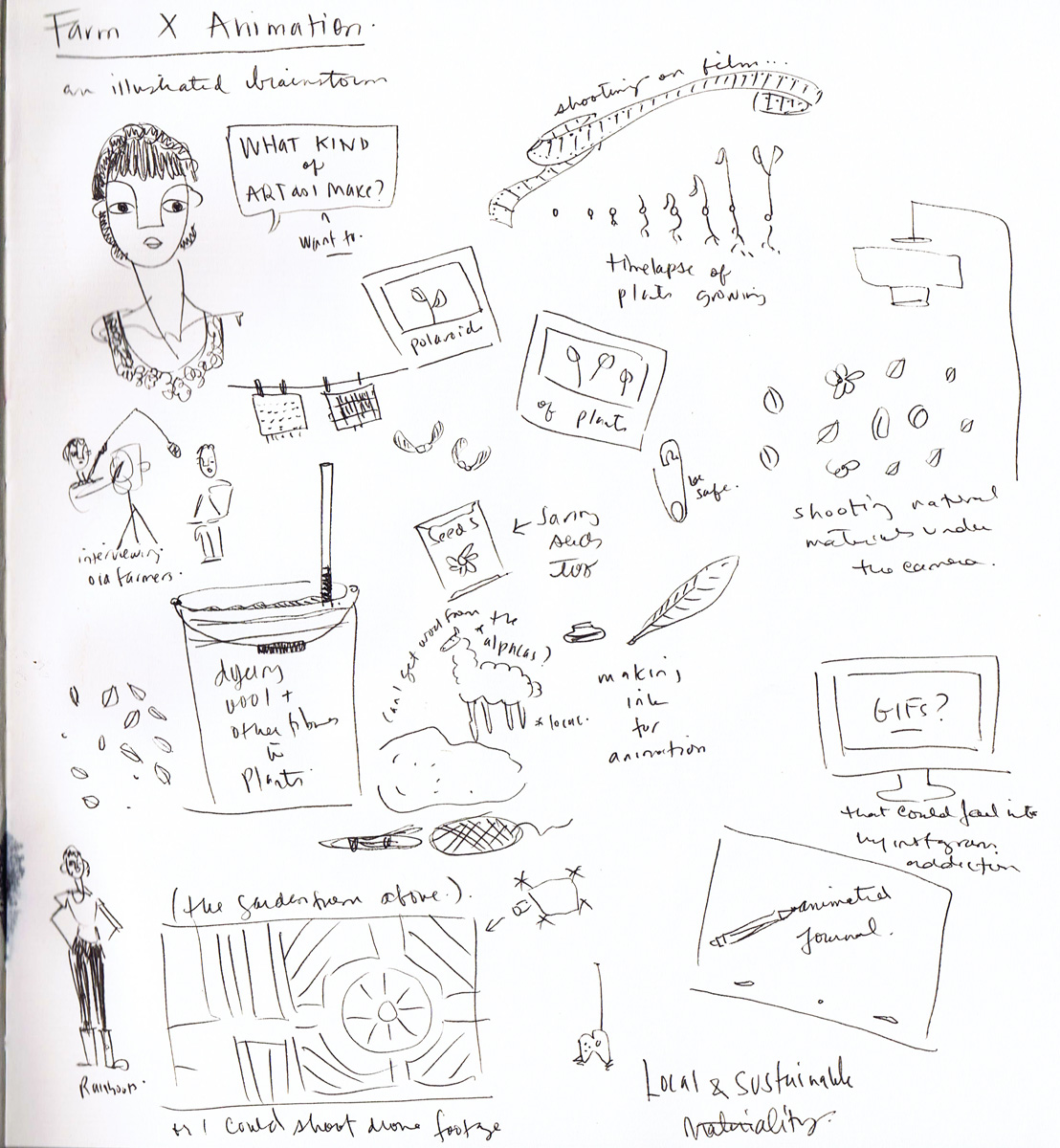 Research Objectives
It is my objective to use the summer months to grow and experiment with materials
which I will continue to use throughout my graduate thesis work. As we are based in
Canada, in zone 5 of agricultural hardiness it is important to take advantage of these
summer months, as growing plants on a large scale is expensive and impractical
throughout the winter.

I will continue to experiment with low impact organic no-pesticide no –till permaculture
growing techniques, which prevent soil erosion, and feed the ground rather than mining
its resources.

The objective is also to create a garden that is beautiful, and photographable, that is as
much installation art as it is functional space.

I intend to use this research study to learn more about and practice the use of these
plants as inks and dyes for natural (and whenever possible locally sourced) fibres such
as wool, hemp and cotton, which will eventually be used in the creation of stop motion
puppets and as a palette for hand drawn animation.

Methodologies
The methodologies employed in this independent study will be diverse, stretching from
horticulture, botany and gardening as experimental research practice, to material
making and craft as practice, in addition to more traditional academic reading.
Additional methods will include animation as investigation into the temporality of plant
growth, and photography as tool for capturing that which is invisible to the human eye.
I am interested in the differences in scale that are visible when a growing system is
sped up or slowed down, and the ways in which animation can be used to explore that
interplay.

Expected Outcomes
At the end of this study I expect to have generated materials, with which to continue
into my directed studio practice in the fall, as well as learned experience about how to
work with these materials. The raw footage and time lapse I generate will also serve as
a media archive on which I will be able to draw through the next year of my study, and
the artistic experiments I conduct will unquestionably have an influence on the
trajectory of my film work moving forward. Animation is an inherently time consuming
media, especially when one is working frame by frame. By taking an extended time in
the summer months to experiment I will be able to move forward in the coming
semester with a clear idea of what already works, and how I can use those techniques
to better communicate thematic concerns in my work.

Oliver, Jamie. Teach Every Child About Food. TED Talk. Retrieved Online.
Uploaded February 2010. Roe, Annabelle Honess. Animated Documentary. New York: Palgrave MacMillan, 2013.
Stout, Ruth. The No-Work Garden Book: Secrets of the Famous Year Round Mulch
Method. Rodale Press. 1971.
van Stralen, Trudy. Indigo, Madder & Marigold: a portfolio of colors from natural dyes.
Loveland, Colorado: Interweave Press, 1993.
Vejar, Kristine. The Modern Natural Dyer: a comprehensive guide to dyeing silk, wool,
linen, and cotton at home. New York: STC Craft, 2015.
4. A discussion of the relevance of your Independent Study to your larger program
of study.
Over the course of my studies in the IAMD programme it is my intention to collect
elements that will eventually be assembled through my studio practice into an animated
documentary film. As I proposed in my initial application to OCAD, my work will aim to
hybridize Animated Documentary with research in and experiments with Sustainable
Agriculture. Since my goal is to work to make tools for sustainability more accessible, it
is important to me that the forms in which I work are linked to the content and the
themes I hope to express. It is one thing to write an argument for a movement towards
more ecologically sound practices, and quite another to render it in toxic supplies.
While I recognize that as a digital media maker, it is in some ways inherently
problematic that I cannot make my own computer or cameras, not can I necessarily
control, aside from researching before purchasing, the circumstances in which said
tools are made or the conditions under which the people who make them work. What I
can control, though, is where I source my raw materials, (since I work a lot with wool I
will be sourcing it from neighbouring farmers with ethical practices, for example) how
the materials (dyes, inks) I use impact the environment, and why I choose them, both
aesthetically and ethically.
This independent study will serve as both an opportunity to make the materials with
which I will go on to create the animated images featured in the documentary – from
processing the fabrics with which I will make stop motion characters in the narrative, to
the inks and charcoals I use to compose the images. At the end of this study I would
have not only a box of tools from which to continue creating in the fall semester, but
also the archival material and research from the process of growing them – that is to
say first hand research content for the documentary, and information that can be
shared about how future practitioners might consider creating low impact art supplies
while encouraging the movement away from harmful pesticides and towards the
proliferation of flowers and plants that encourage native pollinators to return to spaces
from which urban life and commercial agriculture has evicted them.
In one sense, the goal of this study is to move forward, to find ways, in light of climate
change, of reducing one’s ecological footprint. In another sense, it is an exercise in
nostalgia, in retracing the steps of the past, and in returning to practices that our
ancestors engaged in for millennia before forgetting in just a few generations. This
project is both about preserving knowledge and finding a new way forward – it is about
finding a way to make this knowledge accessible to a new generation of creators using
the one thing that digital media can do so well – distribute on a large scale.
5. Evaluation criteria and deadlines (to be determined with instructor).
The work will be spread over the course of the 4 months of the spring semester with
monthly check ins (to be determined) and critiques which will be conducted either in
person or via skype.
I will meet with my supervisor at the start of the spring term in May to determine exact
grading breakdown, but the criteria will likely be two to three critiques plus a written
component, or further broken down into materials tests (inks, dyes), timelapse footage,
animation tests, writing and overall documentation.